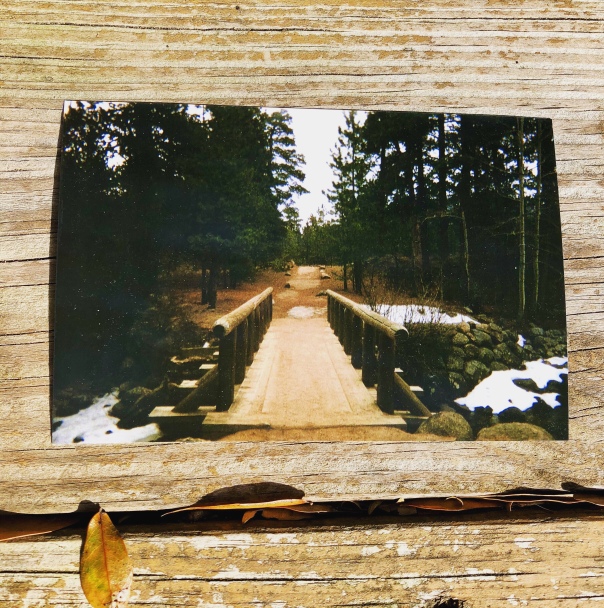 This bridge held such promise for me. It was the bridge I crossed to officially enter onto Rocky Mountain National Park. The second my foot left that bridge, I was in the park, I was free. It was also, at the end of a tiring hike, my welcome home.

While you were standing on it, if you looked to either side, was a beautiful river that carved its way through the landscape. During the winter months, it was sheathed in ice, but there were spots that the water flowed freely. It was fascinating to watch and to see nature, tireless in its conquest. It didn’t matter that ice had frozen parts of it over, it was still going to move.

The bride itself was constructed of large wooden logs that made you feel like you were standing on history. Who knows how long it had been there, who knows how many pairs of feet had passed over its surface.

Families on vacation, solo hikers looking for something more, a couple trying to reconnect with nature, elk and deer and bears, myself…all a part of this collective narrative that was held there.

There were times that I passed over it without a second to acknowledge it, my mind consumed with what laid ahead, there were other times when I sat on the bridge for minutes and minutes.

There was one hike that I sat on the bridge, letting my feet dangle from the bridge and leaned my head against one of the posts that supported the handrail. It was freezing that day, in the 10’s and there was snow all around. The sun was hiding that day, taking respite behind the clouds, and I sat there and watched that river. I contemplated life and my existence within the space I was occupying. The more I sat there, the more connected I felt to that space. Like a tiny string had connected my heart to that bridge and as I sat there, that tiny string became a rope, then a cable, then steel bars binding me to there.

Looking back on it now, it held such symbolism. A bridge, taking me to where I needed to be to heal, and welcoming me home with what looked like open arms at the end of the day.

I’ll always feel connected, hell, even writing about it, my mind flies there, and settles on that bridge, listening to the river and watching the trees sashay in the wind.