I’m a college student. I love to travel. So naturally, I took advantage of the study abroad programs offered at my college. There’s about 9 to choose from, ranging from places like Costa Rica to Ireland. Every trip has a course tied to it that you take while in country. I’ve been on two and will be going on my third in three weeks time.

The first study abroad trip I went on was to Derry, Ireland. I left in early May of 2012 and spent 15 days in country for the class. I then stayed a week and a half later traveling on my own and then my mom met me for a trip to London and Paris. 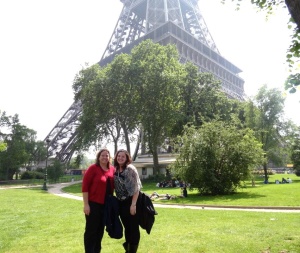 Ireland was fantastic, a place I’ve always wanted to visit and the group that ended up going was 14 girls. Nuts. We all had serious apprehension before leaving but it was actually one of the better experiences of my life. We grew to be very close, albeit a few cat fights, and actually still keep in very close contact to this day. Two of the girls I went to Ireland with are now some of my best “traveling buddies”.

The way in which the trip was set up was easy to understand. We stayed at a local bed and breakfast, went to class three times a week for four hours a day and then had the rest of our nights free. We had planned “excursions” to places like Giant’s Causeway, Bushmills Whiskey Distillery, Belfast and the Titanic Museum, and only one guided tour of the city (thank goodness).

What was awesome about this planned trips was that we were still able to see things as tourists even though we were there for school. It also allowed gave us more of Ireland for our money.

Speaking of money; in total I spent $2300 for 15 days in Ireland. This included airfare, the program fee, food and souvenirs. The program fee included hotel, entrance fees, the cost of the class and transportation. Not too shabby.

I mean, I’ve never claimed to be a “thrifty traveler” but I like to save money where I can. Yes, I could have traveled throughout Ireland on my own for cheaper but I was gaining credits while abroad. I think that’s awesome.

Ireland was awe-inspiring. The history was rich and the people seemed to have this unabashed pride for their country. The greenness of it all is almost overwhelming and there are times where you’re silent, for there are no words to accurately describe the beauty of this country.

My next adventure was to Belize. Belize kind of fell in my lap.
Two weeks before I left for Ireland, one of my professors told me about a scholarship they were giving away to go study abroad in Belize. I figured why not and filled out an application. As luck would have it, I won. All expenses paid (minus airfare) to Belize. SWEET.

So, a month and a half after I got back from Ireland, I began the paperwork for Belize and left two weeks later.

Belize was a complete 180 from Ireland. I frequently get asked about which trip I liked better and there is literally no way to compare the two.

Belize was a different world. Humid and jungle and animals and no air conditioning and true adventure. It was perfect. We arrived in Belize City and ran at about 100 mph for the next 15 days.

We saw Guatemala, we saw Mayan ruins of all kinds, we stayed in local villages, we went spelunking in an ancient Mayan Offering cave, we jumped from cliffs and rode waterfalls.

The class for this trip was Tropical Ecology and instead of sitting in a classroom for a few hours a day we would go into the jungle and learn from locals how different plants interacted with the environment, their medicinal uses, their spiritual properties. All of it. So if you’re a hands on learner, look for a trip like this.

I can honestly say, wholeheartedly, these trips changed my life. They opened my eyes to the endless possibilities that the world offers us that we’re sometimes too afraid to take advantage of. We’re in this world that most people know very little about and studying abroad gave me a chance to completely shift my world view. If you’re thinking about going, do it.

I will forever be grateful I went and I will always value the memories that I have from my time studying abroad.